MI Golf 2017…Light years from one of the Majors 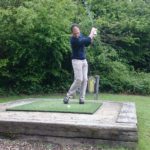 he’s a sly one” Snyman.Who in MI will forget the “nearest the hole” winning shot the last time we played at Sedlescombe? A dramatic tee shot cleverly aimed at a sturdy branch well to the left of the green, perfectly executed to rebound onto the green and trundle up to the hole. Phil is always  a leading contender as he has a brightly coloured bag and looks flash! 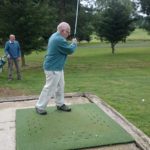 Keith “it’s a sinch” Finch.With his very low centre of balance, Keith packs a powerful punch off the tee- once found inside Peter’s bag! 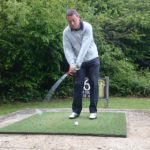 Ollie …the pride of Brigden Hill 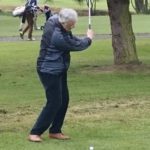 Peter “in the hole” Cole.Twice a winner, cool, calm and composed wherever he is to be found. Notable amongst his MI peers as he can actually play golf! 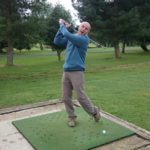 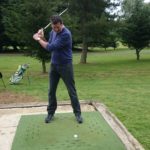 Keeping your left arm straight in a golf swing isn’t all that it’s cracked up to be! 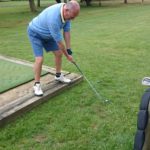 The MI Golf Open was battled out once again back in the early summer and 14 gents played a fine array of strokes. It would be fair to say that onlookers were astonished by MIs directional sense. Some shots were created out of nothing and indeed came to nothing. The competition was won by Chris Sinden and Robin Ratcliffe with a pretty mean score of 47 over 9 holes….small recompense for Robin, missing out on the “Brighton play off final that wasn’t to be” later that same afternoon, but a mighty victory all the same. The winner over the “Nearest the hole” competition was yours truly. I was actually in a bunker and nearer to a rabbit hole but nobody got closer -even Mr Ratcliffe with a rebound off a sturdy cleft chestnut fence was further away……to coin a phrase from Mr Spock …”it’s golf Jim but not as we know it”.