Materials
The materials for use on the new village hall have been approved by the planning department at Rother. These relate to the brickwork above ground and below the cladding, the cladding itself (wooden weather boarding), the roof tiles (clay peg tiles) and the exterior lighting.

Access
The work on the entrance way has been completed. It has been widened and re surfaced, and we are now awaiting a new height barrier to be completed.

Construction
Planning Permission has now been secured in perpetuity by the successful laying of some selective foundations for the new village hall. These were signed off by the building inspector and will count as having made a start, meaning the planning permission will remain valid indefinitely. 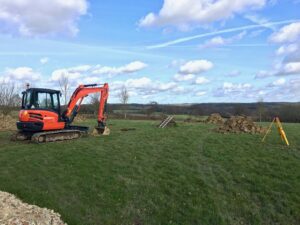 The next six months…

Timeline for the New Village Hall

Drawings/Plans
We have now applied for building regulations approval. We hope to have early project cost information in August of 2020 so that we can start applying for funding opportunities. We are also in discussion with major suppliers to obtain detailed quotations for the manufacture and erection of the primary structure of the building. It has not yet been decided whether to appoint a single contractor to run the project on a turnkey basis or to award several substantial packages of work, picking specialists in each particular field and project managed by us. Our objective is to have identified the primary contractor(s) before the end of the year.

Lease
We hope to have signed a new lease for the site of the new village hall with the Ashburnham Estate trustees (the landlord).  A draft of the proposed new lease has already been received and is under careful review by the Parish Council.  The lease document has proven to be a more complicated document than was first anticipated, this being primarily due to the fact that it will only span a 50-year period. We therefore, need to explore all options extremely carefully in order to protect the community facilities for current and future generations of parishioners. Discussions and negotiations with the trustees are underway and we sincerely hope that a conclusion can be reached in the relatively near future.

Funding
So far we have been able to successfully fund all of the activities relating to the new village hall using money donated by the New Village Hall Appeal Fund and from contributions from the Parish Council precept. Going forwards into the construction phase of the project, it will clearly be necessary to secure substantial additional funding. In the next 6 months we aim to identify potential sources of funding and to have launched several bids for funds from these sources. You might ask why this has not been done earlier. The answer is simply that we wanted to first totally secure the planning approval, get better information about full building costs and have the lease for the site secured for the entire period that any grants/financing will require.

The Parish Council has set up a committee of the parish council with advisory powers.  It is called the New Hall Steering Group and chaired by Cllr. Richard White.   Most of the Steering Group’s work is done through its working groups.  These are set up for a project and then disband afterwards.  However, three are ongoing and have their own web pages, linked below, which you can view for more details on their progress:

Paul Clark has made a stunning scale model of the new hall! 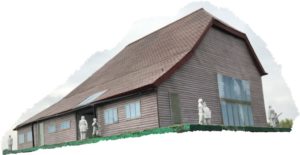 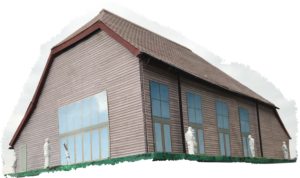